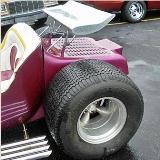 I was surfing the web and ran across a dramatically different looking T-Bucket that was for sale. The enthusiastic car dealer listed it as, “1923 Ford T Bucket HOT ROD-SHOW/DRAG Car: One WILD, KUSTOM SHOW CAR that is ALSO one FAST BEEAAATTTTCCCHH !!!!” I had to agree it was wild — and maybe a bit crazy, too. I felt that many of our fans here at TBucketPlans.com would like to see and know more about it, but since it was so radical looking I decided to put up a “trial balloon” first on our Facebook Page. Which reminds me: if you’re on Facebook and haven’t already “Liked” us, please go to http://www.facebook.com/TBucketPlans and click that Like thumb because it’s a great chance to see a whole lot more about T-Buckets that we regularly post just on Facebook. Anyway, we immediately got over 50 positive responses from fans saying “yes, we want to see more on this Crazy T”. So, we’re happy to oblige with more pics and info. It was described in the listing as, “BIG BUCKS spent in her build a few years ago” and that was pretty obvious because unlike most T-Buckets it had a long custom round tube frame and, of course, a very unusual body that had been radically cut down as well as stretched. The cut down body was probably inspired by Dan Eichstedt’s famous “Leg Show” T-Bucket of 1970 — and if you love that car as much as I do, then be sure to follow us here because we’ll have a terrific story with tons of pics on that T-Bucket legend. I might also guess that the extreme lowness of this T might have been inspired by another T-Bucket of much significance built back in the late 60s by then-Chicago hot rod builder, Don Kendall. And if you’re a fan of Don’s fabulous T’s we have a couple of great stories on them coming up, too. The car dealer, though, seemed more concerned about describing the engine as, “POWERED by a 383 STROKER chevy with a ram 2/4 BBL manifold with Holley carbs, and EIGHT INDIVIDUAL CHROME EXHAUST PIPES that SING I Aint NO SISSY when ya LIGHT HER UP !!!!!” He further described the engine package as, “the motor is an HX suffix code… this decodes to a 1969 CORVETTE ONLY High Performance, 350 Cubic Inch, 350 Horsepower, A/C and 4 Speed motor … Read that as RARE !!!” The hyped up dealer’s description continued: “4 Wheel WILLWOOD DISC BRAKES, Aluminum Moon Gas Tank and the Polished Torque-thrust wheels and tire combo make her look and RUN like a FULL-BLOWN DRAGSTER !!!!” His exclamation point key must have been sticking. He then went on to say, “The KUSTOM White and Purple interior looks like a SHOW CAR RIGHT OUT OF THE 50s !!!!” It was also listed as having, “Turbo 400 trans, shift kit, stall converter, B&M ratchet shifter.” Things were summed up by saying, “You can own her for about THIRTY PERCENT of the BUILD COST … let alone… Have the ABSOLUTE COOLEST Ride at the show or cruise night and well bet there wont be a THING there that will scoot NEARLY AS QUICK as this baby can !!!! All ya gotta do is HIT THE KEY and the competitors RUN AWAY !!!! A TROPHY-WINNING SHOW and GO car on the CHEAP !!!! HURRY …. this ATTENTION- GETTER is gonna leave REAL QUICK …………. !” You have to love the rear view with its louvered turtle deck, custom tunneled license plate holder, the Frenched ’39 Ford tail lights, those huge tires, a nicely narrowed rear end, and even the wing. But as much as I love the rear view, I’m still scratching my head over this front view. Did a smaller or laid-down radiator maybe not work and that’s why this one is sticking up as high as the tunnel ram? And the headlights look like they might have been put on as an afterthought. And should I even mention how massive the fuel tank appears. It looks like it’s even wider than the body. I called the dealer to learn more, but the car had already been sold for $8995, which in my book is quite a deal (it was originally listed at $18,900). I wasn’t able to get much additional information from the dealer and I even contacted a tune-up shop in Queens, New York that had done some work on the car but was only able to learn it may have been originally built in Florida.

So, if you know the original builder, past or current owner please have them contact me at john@tbucketplans.com because I really would like to learn more about this car which I think has a number of very unique elements going for it. I’d love to see and be able to publish some original build pics or more details shots of this crazy T. Hope you enjoy it.

5 thoughts on “One Crazy T-Bucket”