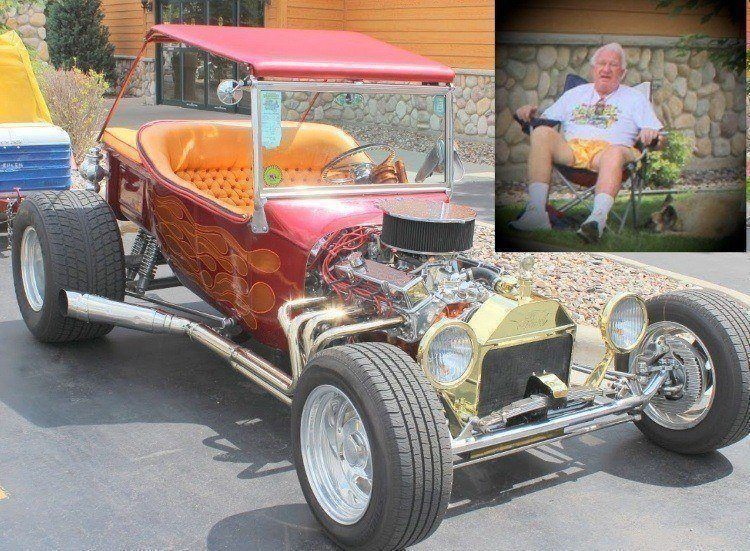 At the 2018 T-Bucket Nationals in Springfield, Illinois yesterday, it was announced that John Eplen, known to many as T Pilot with Pups, was inducted into the National T-Bucket Alliance Hall of Fame. Congratulations, John! John is among the first group of NTBA members and has attended most all of the T-Bucket Nationals over the past 20 years.

One really sharp T-Bucket that you could count on seeing at just about any T-Bucket Nationals is this unique one first built in 1972 by John Eplen of Kingsland, Texas. Unfortunately, John was a bit under the weather and wasn’t able to make it to Springfield this year and we all wish him well. Known to NTBA members as “T-Pilot with Pups”,  John is known for not only towing a trailer on his many long distance journeys but for also having two passengers in the form of his canines you can see resting in the background beside their seated master in the photo below. And just how is that possible, you may ask, especially in the compact confines of a T-Bucket roadster? Well, John’s T features his own design interior with a single bucket seat for John and an elevated platform on the passenger side for his dogs to recline. As you’ll note from the above photo taken at the 2015 T-Bucket Nationals in Green Bay, Wisconsin, in the month of July the “pups” were shedding to keep the heat off. Being long-distance transportation for a man and his dogs isn’t the only distinction of John’s T. This cool T-Bucket has more unique details and features than you can shake a stick at. To start, rather than rectangular steel tubing, John’s T-Bucket frame was fabricated from 2 7/8″ diameter chromoly tubing by Moose Schroeder of the legendary T-Bar Chassis shop that built funny car chassis’ for the likes of Gene Snow and Raymond Beadle. The interior even features a rare T-Bar accelerator pedal. John used an early Total Performance fiberglass T-Bucket Body which was painted and striped by Jack Dooney, who built one of the earliest Norm Grabowski Kookie Kar tribute cars in the 1980s after moving from Texas to Arizona. The stock XKE driveshafts were replaced with much beefier versions made by Jerry Kugel.  The specially designed trailer hitch attached to the differential can also be seen in the above two photos. But to see it even better … You know we love “under construction” photos — and John’s are the best! Also very clever keeping the MSD box away from any heat sources and not cluttering up the firewall. John Eplen is a true hot rodder and does his own metal polishing. He invested over 300 hours in the rear end alone. Even the Jaguar differential was treated to the Candy Apple laquer! A big unique visual on John’s T is the top. Rather than a traditional T-Bucket top, John went with a Bimini boat style top. The way it was cleverly designed and constructed allows John to run without the typical windshield support rods found on the front of most T-Buckets. And those are not your normal aftermarket or converted Model T tail lights. They were whittled from solid blocks of aluminum. You’ll also note the side perspective on the custom trailer hitch. If you think the T-style radiator looks a bit narrow, you’d be right because the front frame width is only 18 3/8″.  For further unique appeal, the spring is mounted above the tubular front axle as opposed to the typical behind the axle arrangement most on most T-Buckets. To keep the front end low, however, John has used a tall spring perch. The shiny brass radiator, which perfectly matches the big brass headlights, is an original Wellbaum unit and steering is by the tried and true reversed Corvair box. Yet another unique visual element that’s also quite practical on John’s T is the stylish adaptation of Supertrapp mufflers to the chrome Sanderson headers. John did the distinctively different button tuft upholstery himself and you’ll not he’s also added a tilt steering column for convenience. And that shifter isn’t attached to just any old transmission. A few years back, John installed a Tremec TKO 500 5-speed overdrive tranny for those long road trips. Of course, he polished it himself and said it’s the toughest polishing job he ever tackled. But one look and it’s well worth the effort. To me, just seeing all the details of John Eplen’s T-Bucket up close and personal and having an opportunity to discuss them with him is reason enough to attend any T-Bucket Nationals or regional event.

If you’re like me and just can’t get enough of the incredible detail on John’s T, then you’ll enjoy this video inspection.

From not only me, but all his T-Bucket brethren, we send our congratulations and get well soon wishes to John Eplen. 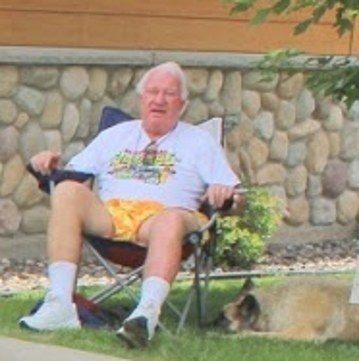 We’ll all be looking forward to seeing T Pilot with Pups at the 2019 T-Bucket Nationals in Arizona.