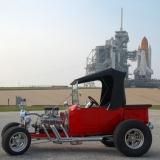 As a hot rodder and T-Bucket fan, you’re no doubt into well-engineered high performance machinery capable of reaching mind-numbing speeds. So, you’re probably saddened that in a shade over 72 hours from now the NASA Space Shuttle Atlantis will lift off on the final flight of the shuttle program, known as STS-135. With that fateful event eminent, Ken Delaney fired up his T-Bucket and motored out to NASA Kennedy Space Center’s Launch Pad 39A to pay final respects to their high performance brethren. While maybe not as high up on the food chain as Atlantis, Ken’s 1922 Ford Truck “T-Bucket” is nothing to sneeze at. The engine is a “67” Chevy 327/ 370 hp bored 0.040 over with an Edelbrock Performer RPM Hydraulic Roller Lifter Cam and Performer RPM heads. Dual-Quad intake manifold and two 500 cfm Thunder Series carburetors. The ignition system is powered by MSD Digital 6 Plus and Distributor. The Trans is a strong 350 Turbo / 3500 B&M Hole shot Torque Converter, with an Eaton Posi and 3.73 gears. This mechanical last communion was bittersweet for Ken, who’s been a 27-year NASA employee. Our hats are off to Ken and the whole NASA team that has shown what great accomplishments can be achieved through commitment, creativity and hard work. Bon voyage.

And in case you might wonder why Ken loves his job at the NASA Kennedy Space Center and the shuttle program so much, take a look at this video: