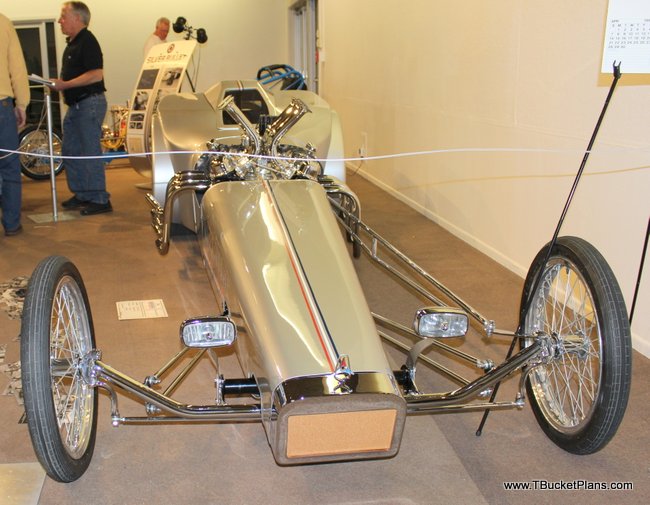 If you didn’t get enough of the Grand National Roadster Show Pomona 2014 in Part 1, Part 2 or Part 3, then here’s some bonus T-Bucket coverage from the event. I’ve always been a big fan of T-bodied modified roadsters going back to those of Jess Van Deventer and Gary Cagle. So, it was no surprise I had to stop when I saw Stormy Byrd’s T-bodied, blown small block Chevy powered B/Fuel Modified Roadster, “Revelation”. Although built to its current configuration in the 1980s, Revelation is based on a 1960s 135″ wheelbase front wheel dragster chassis. What’s really cool is that this wasn’t built to be a “cackle car”, but to race in nostalgia meets where it turns times in the low 7s and puts on such a terrific, smoking show that it was invited to an exhibition in New Zealand where it created tremendous excitement. And just to have some fun, they’ve included ’39 Chevy tail lights for those who end up following Revelation. It was a real treat to see in person and one has to wonder how much more popular NHRA drag racing would be today if this type of car were to have a place to run and some support. But, I wasn’t prepared to be absolutely blown away by the incredibly beautiful, truly one-of-a-kind masterpiece “Silver Bullet” that was actually designed and built by Stan Johnson in his garage back in 1964 and 1965. When you begin to soak in the ahead-of-its-time streamlining for a Modified Roadster and all the other incredible details it comes as no surprise that Stan is an industrial designer of considerable skills possessing equally strong mechanical talents. The car is based on a modified Lakewood chassis and the bodywork is a combination of fiberglass and aluminum fabrication. Check out how the drag link is elegantly reinforced to reduce “whip” with the then long wheelbase. What’s truly amazing is that Stan fashioned a T-Bucket based body like none that had ever gone before, with the driver enclosed by the tonneau cover with a nicely designed opening canopy that also provides forward vision. I have to apologize for not being able to capture the 1965 Cadillac Firemist Silver in all its true glory, having to crank up the exposure a bit to compensate for the low light levels at the Grand National Roadster Show Pomona 2014. And the streamlined wheel fairings are beautifully executed. Nobody was doing anything like this for anything other than the salt in the mid-60s! Stan, the man of many talents, was also quite a mechanical innovator. To power the Silver Bullet he chose the newly introduce Dodge 273 cu. in. engine, for which no fuel injection was readily available from Hilborn, Algon or Enderle. So, he built his own! And the flowing, belled stacks just blow my mind. And from the rear Stan’s Silver Bullet is just as gorgeous as from the front, with it’s mail-slot rear window and the chromed push bar elegantly exiting an elegant detailed molding on the turtle deck. I know what you might be thinking, it was just a show car. While it did see time on the ISCA circuit it also earned its credibility on the strip as you’ll note below. But what’s also great about the Silver Bullet is that thanks to Stan’s talents it has risen from the ashes. After being sold, it went through other hands and finally with much effort to be able to recapture all the original parts ended up back with Stan in Wisconsin where it was lovingly restored. You’ll be impressed to learn that with its little 273 Dodge engine, running in CG/MR (C Gas/Modified Roadster) the Silver Bullet held the Drag News record for that class at 142 MPH. And when Stan tipped the can it ran 162 MPH on fuel. Seeing this car was one of those things that made the day for me at the Grand National Roadster Show Pomona 2014. If you’d like to learn more about and follow the exploits of Stan Johnson’s Silver Bullet you can do so on its Facebook Page.
[hcshort id=”5″]