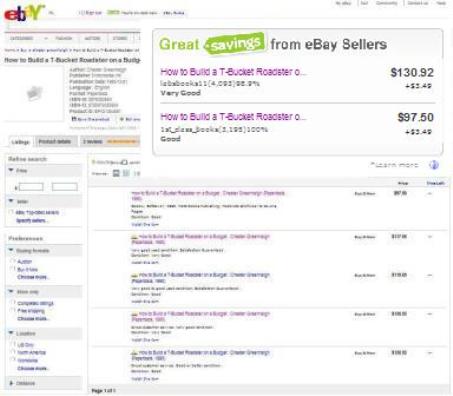 While making a couple of blog-related purchases on eBay this afternoon, out of curiosity I thought I would see if Chester Greenhalgh’s “How to Build a T-Bucket Roadster … ” books were still being sold on eBay. Man, was I surprised! Five copies were listed at prices from $97.50 to $130.92 (and, of course, shipping was extra)!

I had originally thought that when we started offering Chester’s valuable hot rod-building information in a $19.99 eBook format for the new, 25th Anniversary digitally remastered version that the hard copy prices on eBay and such would drop like a stone. I was so wrong. Thinking about it, though, I realized that our offering Chester’s work to a wider audience only created more awareness of it and it’s likely that the “collectors” among us are buying up the hard copies with a view to the day when having an original paper copy will be a mark of distinction as the books gain a new, broader afterlife in the digital Internet world. That’s cool: it’s a win-win.

April 29, 2011 Update: Wow, Chester’s T-Bucket how to book is selling for $489 in Japan!
So, what are you waiting for? What others are willing to pay hundreds of dollars for you can get the latest version of for only $19.99.