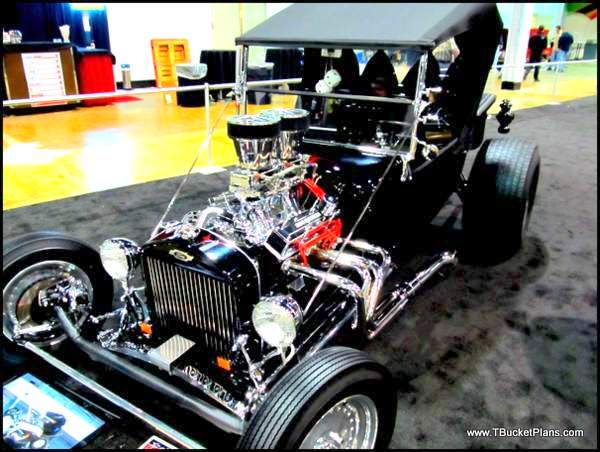 Among the select group of T Buckets invited to exhibit in the “Tee Party” at the 2013 Chicago World of Wheels, was the black beauty of Randy Krnac of Plainfield, Illinois. Randy’s T Bucket is a great example of how relatively subtle design elements can come together to produce an eye-popping T Bucket that has timeless appeal. There’s nothing like flawless black paint, tasteful chrome plating and very subtle red accents when it comes to turning out a visually impressive T Bucket. Of course, a healthy tunnel-rammed small block Chevy, some monster meats on the rear and a set of wheelie bars to keep it all under control add to the visual excitement. I’ve seen this T Bucket before

After glancing only briefly at this fine T Bucket and seeing the distinctive upholstered cover on the front axle, I realized that I had posted a video a few years ago about Randy’s T Bucket without knowing at the time the name of the owner. I’m now glad I finally made that connection. From the rear you can see the nice chromed coil over shock suspension, but what’s really nice here is the distinctive rear window treatment on Randy’s top. The interior looks very inviting with its engine turned dash panel and full array of instruments. The tiny steering wheel undoubtedly makes entry and exit easier with the under floor mounting of the steering box. The red interior trim accents are a perfect, subtle highlight to the tasteful, all-black environs of this sharp T Bucket. From the side, the extensive chrome highlights are showcased and Randy has done a very nice job positioning the step plates just above the headers. To see more of this black beauty T Bucket, here’s a little video I shot while at the show. It’s a little on the shaky side, so I’ll have to improve my technique next time.