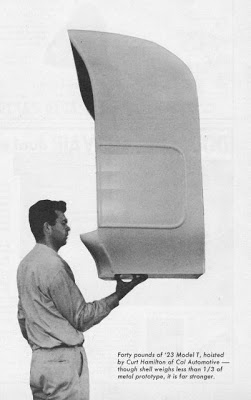 It’s now time to make the history of the fiberglass T-Bucket body complete. Primary credit must go to esteemed journalist and photographer Bud Lang, whose work was published in close to 500 major magazines and books in a career spanning over four decades. In January, 1974, Bud was almost singularly responsible for the editorial content of that month’s issue of Rod & Custom magazine, which contained some thirteen stories related to T-buckets.

One of those stories was a “T-Body Buyers Guide”, which covered not only what to look for in a fiberglass T bucket body, but also a history of the non-metallic bucket. Probably no person was better qualified to write this story than Bud, simply because while he was the second fiberglass ’23 bucket builder he was actually the first volume builder of ‘glass bucket bodies.

The first recorded account of the availability of a fiberglass T bucket body was in the August, 1957 issue of Hot Rod magazine in a small ad placed by the Diablo Speed Shop in Northern California. In addition to their highlighted deuce grille shells, there was the “also available” mention of their “Fiberglass T-Buckets” for $149.50.

Around that time, Bud was working for Petersen Publications doing photography for Hot Rod, Rod & Custom, Car Craft and Custom Cars when he encountered his first fiberglass T-bucket in the form of the sharp roadster owned and built by Buzz Pitzen. It turns out Buzz had wanted a fiberglass T-bucket and purchased one of maybe a couple built by Diablo Speed Shop, which evidently went out of business shortly thereafter.

Buzz’s bucket was a beautiful car, but not without a lot of work on his part, because the Diablo body mold separated at the doors and was rough, to say the least. Buzz and his bucket made the June 1962 cover of Hot Rod. (You can learn more in our post on “The World’s First Fiberglass T-Bucket Hot Rod: Buzz Pitzen ‘s ‘Glass Image’ — Part I“).

The car was so distinctively dramatic that it was also featured on the cover of Hot Rod Yearbook No. 2. (Buzz Pitzen’s love of great looking cars continues and, coincidentally, one of his prized vehicles, a 1930 Buick boat-tail speedster his grandson, Jordan, helped restore, was showcased in the Concours D’Elegance at the 15th annual Muckenthaler Motor Car Show).

So, three years after Diablo’s T-bucket intro Bud Lang and his partner Curt Hamilton shelled out $25 to rent a steel ’23 T roadster body and had legendary painter and customizer Dean Jeffries clear up any imperfections in the then almost 40 year old skin, along with whacking off the unsightly rear “horns” on the body and substituting a nice rolled pan, which became the standard look for virtually all fiberglass T-bucket bodies thereafter.

With the Jeffries’ cherried body, which still had to be returned to its original owner after its use, Bud and Curt hired the equally legendary Nat Reeder, “The Glass Man” to produce their first body mold at his Fiberglass Auto Body on Sunset Boulevard in Hollywood. Nat had earned his reputation as the country’s premier Corvette fiberglass repair and custom body panel molder. It has been said that Dean Jeffries was the Rembrandt of painting and Nat Reeder was the Rodin of fiberglass structure. Bud Lang and Curt Hamilton had chosen wisely for what would become their budding business venture.

That body mold became the foundation for Cal Automotive, Bud and Curt’s company that offered the first mass production T-bucket body. Initially, their bodies were grabbed up by drag racers who were in a constant quest to improve E.T.’s through weight reduction. Fortunately, they are still with us and I am forever grateful to Bud Lang and Curt Hamilton for their help in this T-Bucket history and for the more extensive Cal Automotive history.