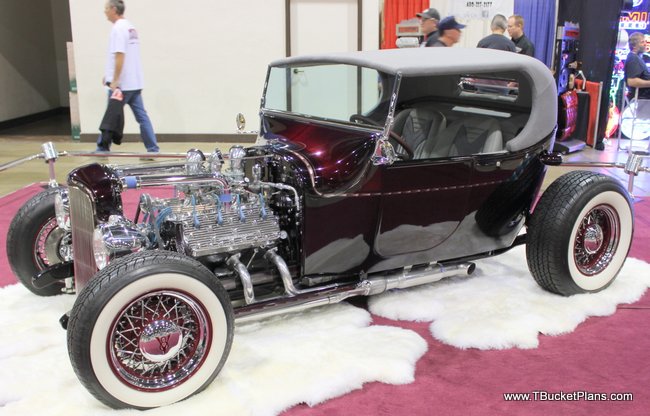 Here are the T-Bucket contenders for America’s Most Beautiful Roadster 2014 at the Pomona Grand National Roadster Show. As I noted in the Grand National Roadster Show, Part 1, I was starting to feel a bit like maybe I might not find any T-Buckets contending for America’s Most Beautiful Roadster 2014. I was hoping to see some really cool T builds that may have been inspired by how well the Takeout T did in the past and how John Mumford’s ’27 T won the coveted trophy last year. In that regard, I was not disappointed. While the name on the hand-made stainless fuel tank says M&M Special, this great looking 1927 T roadster of Charlie and Karen Matus is also referred to as “The Chocolate Rose”, which is the custom mix PPG paint color applied by Jim Ramirez of Stockton, California. The chromed Currie 9″ third member really gets attention at the rear. It features a modified steel ’27 T body on a custom frame by Dave May of Genesis Fabrication in Galt, California, with help from Joe Gonzales. I was impressed by the clean simplicity of the display, with the mirrors strategically placed in order to provide excellent views of the impressive undercarriage.

Lending a classic look are the Rally America 15″ (front) and 17″ rear hot rod wire wheels with Maxxis radial tires on the rear and Nanking radials on the front. Up front is a ’29 Ford radiator shell mated to a custom hood. The chromed and drilled dropped axle is suspended by quarter elliptic springs and stabilized by hand-made wishbones. The chrome plating is by Sherm’s Custom Plating of Sacramento, California and the tasteful pinstriping is by Herb Martinez of Livermore, California. On the driver’s side you’ll note the custom pod over the Schroeder sprint car steering unit and the mirrors reflect the absolutely beautiful chromed headers and exhaust pipes which don’t interfere with the overall lines of the car.

What you can’t see so well is the tan ultra leather upholstery by Ross Gomez of A&A Top and Trim in North Highlands, California, as well as the hand fabricated dash. Now we’re talking! Bill Enderson of Redding, California built this gorgeous ’23 T-Bucket in his home garage and it has so much classic hot rod and custom influence that a black and white photo would make you believe it was built in the early 50s. Bill did the body work and made it look uniquely different from any ’23 T you’ll ever see with its beautifully smoothed cowl. Using a frame with front horns like a Deuce and mounting a ’32 grille shell ahead of the dropped front I-Beam axle further reinforces the uniquely traditional look of this T. But what’s really cool is how Bill has blended old style with new performance and safety features, like the disc brakes that are used both front and rear. The Vintique Spoke wheels and wide white walls add elegance and are a nice compliment to the padded stop that evokes Carson images from the past and looks perfect when mated with the arch of the windshield glass. In keeping with the old and new theme, Bill has mated a great looking 304 cu. in. flathead to a Ford C-4 automatic transmission. The headers also are beautifully formed to maintain the overall lines of the car. That unique top also features a nice little opening window at the rear and the chromed quickchange center section is yet another traditional element that works so well. Now, here’s where it gets really trick. Bill uses coil over rear suspension, but has worked his magic so that it is totally hidden. The tail lights are perfect. It also appears that Bill has reshaped the doors. Also, when it comes to display this is very simple with the white fur rugs over the pink carpet evoking a look of luxury. To me, what Bill has created is what a luxury hot rod/custom of the 50s would look like. The interior features upholstery by Scott Stanley and a tilt wheel. This view also gives you a better idea of the very tasteful, yet eye-opening painted graphic accent that wraps the car. Overall, it’s a T-Bucket like I’ve never seen before — and that’s good.

That’s it for the America’s Most Beautiful Roadster 2014 T-Bucket contenders, but you’ll want to check out my third and final installment in this report to see something new in the T-Bucket world (if you have deep pockets) as well as more T-Bucket based hot rods on display at the Grand National Roadster Show 2014, Part 3.
[hcshort id=”5″]