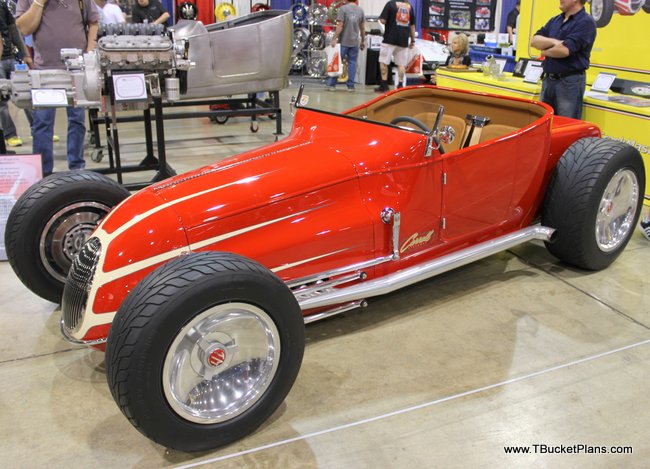 After checking out the America’s Most Beautiful Roadster T-Bucket contenders, I continued my journey through the various buildings that house the Grand National Roadster Show and continued with some more T-Bucket discoveries. How about a new all-steel Track T body with a matching aluminum Track T nose? Check out how the cowl has been shaped to match perfectly with the Track T nose and aluminum hood panels. In case you’re wondering, those are sprint car spindles mounted on a nicely dropped billet aluminum I-beam axle weighing all of 8 pounds! Oh, and it’s sprung by a 3 pound mono composite spring!! The front suspension features 4-bar linkage and the body, which is fabricated by Bobby Walden, isn’t just sitting on top of the frame — it’s a monocoque steel structure that allows the driver and passenger to sit further down in the body of the car. What that means is that instead of it looking like you’re riding “on top” of this T, your head sticks up just a bit above the back of the body. And the body features hinged opening doors on both sides. Since room is always at a premium in a T, this one features a custom bellhousing linked to a slim line transmission that allows the foot room and pedal space needed to operate the 5-speed manual transmission, which in turn is mated to a 525 HP LS-3 engine with 10.8 to 1 compression. And the turtle deck that mounts to the back of the body houses a 12 gallon fuel cell. Curious what it is and what the finished product looks like? Well, here it is: The Carrell Speedway Special made in a limited production run of 10 vehicles by TrackMaster Products. What better place to unveil such a revolutionary Track T roadster than at the Grand National Roadster Show. The roadster features front 15×8 Halibrand style smoothies with knockoffs and the rear are 18×11. The roadster has Wilwood disc brakes and calipers and a custom hung rear emergency brake. Coupled with being seated low in the vehicle the low windshield allows a refined driving experience with this open roadster. The traditional side steering is accomplished by using a TrackMaster Products steering box with adjustable ratio. The special analog/digital gauges are made in collaboration with Speedhut Inc. The roadsters are sold ready-to-paint and upholster. The rear end is a Winters quick change and the rear suspension is an inverted 4 bar with coil over adjustable gas shocks. With the IMCA spec 377 cu. in. engine developing 525 HP in a 1600 lbs. car the variable suspension gives the owner the ability to tune the vehicle to track or slalom use. The 12 gallon fuel cell in the turtle deck gives the car a range of 200+ miles and a purpose built luggage rack provides room for belongings on extended trips. A removable soft top completes the package for protection from sun or rain. This is definitely a car for the discriminating hot rodder, though. The end cost is estimated to be $235,000 to $250,000 depending on the finish options. You can learn more by contacting TrackMasterProducts. Of course, Speedway Motors was at the Grand National Roadster Show and their booth featured the Tribute T built by Rod & Custom magazine.

I don’t think it’s too much of a coincidence that the current R&C T-Bucket project looks pretty similar to the one that R&C editor Rob Fortier built back in 1996 when he was on the STREET RODDER magazine staff and which we noted in a story about the R&C T-Bucket project. It’s a great looking T and I love the use of simple black and white to give a very striking look. Having recently become enamored of Jaguar independent rear suspensions in T-Buckets (yeah, I know, sometimes I’m slow on the uptake), I was stopped cold when I spied this great version in the T-Bucket of Dale and Cathy Whygle of Bakersfield, California. With a beautiful interior in their California Custom Roadsters body, it was a stunner. Perhaps most stunning, though, was the supercharged 1956 354 cu. in. Chrysler hemi engine which fed a GM Turbo 350 automatic transmission. The distinctive California Custom Roadsters style front suspension was given the full chrome treatment and every detail on this T-Bucket was top notch.

But, that’s pretty much it for T-Buckets as displayed indoors at the Grand National Roadster Show 2014. While I was disappointed to not be able to see more, I realize that on Saturday they opened up the gates to some 500 to 800 cars to be exhibited outside the Fairplex buildings and there undoubtedly would be many more fine T-Buckets for one to see. Next time, I’ll have to plan in advance to attend either on Saturday or Sunday.
[hcshort id=”5″]