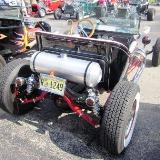 From the rear, the Model A crossmember maintains the classic theme with the high-arch spring. The spun aluminum, 10-gallon fuel tank is perfectly highlighted by the tasteful white and red pinstripes on the body, with the stripes even extending to the rear axle. I love the clean, white interior with red piping, the black carpet and the subtle dash with the neat three-gauge cluster. Nothing added that doesn’t belong is the byword here. Up front, things get interesting with the frame stretched almost an extra foot, which may certainly help the overall ride and stability, while also lending a bit of a competition look. The use of red accents via the radius rods, wheels, engine, etc. is another nice touch. The modern, double-snorkel air cleaner is a nice contrast to the traditional Model T steering wheel in this view. We know you’ll want to see more “up close and personal” of Victoria Bowles’ cool T-Bucket, so we have a nice 2 min. 35 sec. video waiting for you.