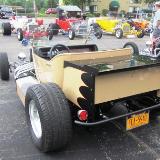 When I first spotted Richard Hebert’s T-Bucket at the 2011 NTBA Nationals, I was struck by its unique low-slung appearance but had a nagging feeling that it looked like something else, too. After walking around it and taking in the details it finally came to me: it looks like a super modified from days gone by. Then, I noticed the Empire State license plate and Rich’s registration from Syracuse, New York, which is right in the center of the high-power, high-speed super modified racing world. It was a natural. And Rich’s T is actually built to be able to take some hot laps if the urge ever arises. For one thing, Rich has included a nicely done, inconspicuous rack and pinion steering system, which can be seen directly under the Ford engine’s headers. But, he’s also retained some very traditional hot rod cues like the split wishbones which are connected to an I-beam axle, but there’s no leaf spring up front — in true circle track fashion, the front suspension is done by way of torsion bars. The super modified look is further enhanced by the clever housings on the side of the body that serve to hide and protect the mufflers and also provide a convenient “step” into the doorless T body. And, yes, that’s an actual working externally mounted emergency brake handle. Of course, those fat rear tires are Hoosiers. Around back, you’ll notice that the pickup bed has a strong super modified influence; housing the fuel cell, with a spoiler on top and all protected by a nostalgic nerf bar. Look closer underneath and you’ll see that the rear end is also suspended by torsion bars just as it would be in a super modified. The interior is race car sparse, with bucket seats and a padded steering wheel. What you may not have noticed already is that Rich has used a stretched T-Bucket body for more leg room and has adjusted for that with a nice dash panel with wooden insert that puts the digital gauges closer to the driver’s field of view. Up front, you’ll see the sturdy panhard bar, nice aluminum radiator, and disc brakes. At the Nationals, however, Rich had encountered a broken shock mount after driving around Southern Ohio and becoming a pot-hole casualty. This view will show you how far the dash was extended to compensate for the stretched body. We know you’ll want to see more “up close and personal” of this cool T-Bucket, so we have a nice, long 3 min. 57. sec. video on Rich Hebert’s bucket waiting for you.  Just click on “Tweet” or “+1” below to view it.