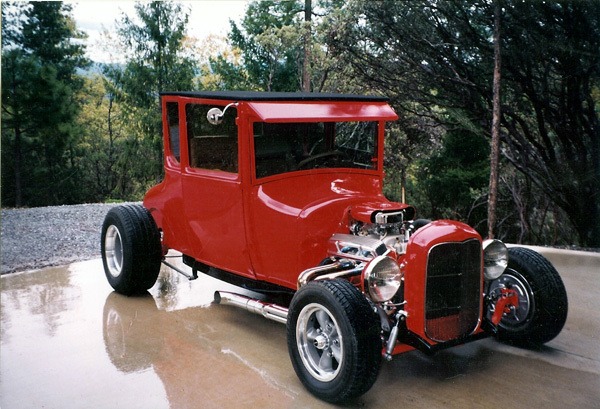 Somebody recently noted that all of our T-Bucket love was focused on roadsters. Why not coupes? Just because they have a roof they shouldn’t be overlooked. And I agree. So, take a look at this beautiful 1927 Ford Model T coupe built by Bob Hamilton of StreetRod 101 DVD library fame. Roadsters aren’t for everybody. And when you can find a Model T coupe body it’s absolutely worth building as a unique hot rod because there are very few around. The bonus cool feature is that most of it can be built using the same techniques used to build a T-Bucket. After all, a 1927 Ford Model T coupe was built on the same chassis that Henry Ford used for the roadster versions. And there’s something to be said for the creature comforts of an enclosed car. Hey, I’m sure there are times we’d all love having some nice windows to keep out the elements. And a 1927 Ford Model T coupe like the one Bob built has an awesome look going down the road. It’s enhanced even further with those distinctive front frame horns of a Model A frame when you build one like Bob does.

So kick back and we’ll fill you in on just how Bob Hamilton went about building this Model T coupe. Maybe you’ll be inspired to build your own. This is what Bob started with initially. It took this body and another one plus some sheet metal, bondo and a lot of hard work to get this 1927 Ford Model T coupe looking like it does. As you can see, this is the better of the two bodies Bob started with and it’s not even that great. Both junk bodies were used to build one nice one. In this case, a good place to begin was to sand blast the better of the two bodies inside and out.  According to Bob, it’s a lot better to prepare a body or sheet metal prior to beginning a project than to get into it and find out it can’t be welded or worked on because of all the rust.  If he were to blast this body again today, he would use soda instead of sand.  There is less distortion and it keeps more good metal in place instead of removing it with the sand.  Also there is less chance of blowing through the metal and creating more problems. Sometimes it just makes good sense to turn the body over to work on it. Here panels have been replaced and a new firewall put in as well as some wheel well work. The flat roof of a Model T is a nice feature that makes this possible. Then there are times when you need to work on the body with it upside down and on a cart so that you can move it out of the way to make room for other cool projects. The rear of the car also needed some patch panels along the top of the trunk opening and across the bottom of the rear pan. Old metal sometimes requires bondo to cover the entire panel even after a lot of metal work. Bob says that he’s not a metal finisher. But, he is a bondo finisher – after he gets the metal as close to original as possible. This body is in the first stages of rebuild and is ready for the frame and suspension to be fabricated. The frame is built from 1 ½ x 3 inch, .188 wall tubing and is curved to fit the bottom of the body. The procedure for doing this yourself is shown in Bob’s StreetRod 101 Frame and Chassis Construction DVD. It is not hard to do and an entire frame with brackets can be built for less than $250.00. By the way, the DVD is 4-1/2 hours of detailed “how to” information you’ll be glad you have no matter what kind of hot rod frame you may be thinking about building. As Bob begins to build the frame and set up the suspension system, he’s always found it easier to start with the rear suspension system and work forward. This way he can adjust the body, rear end, wishbones or radius rods, etc. and can work the kinks to the front and then finish with the proportions working out just right. Since he didn’t take any pictures of the rear under construction- we’ll look at the front and you can pick up on the rear in a later photo. All the brackets, crossmembers, radius rods, shock mounts, engine and trans mounts, panhard bars, front frame horns, etc. are all shown in the StreetRod 101 Frame and Chassis Construction DVD. Here is another view of the under construction procedures with the body mounted. This particular car was fabricated together and everything built and tacked in place in about 6 days. Bob did it over Christmas break one year. Now the finish work is what really takes the time! Kind of a similar shot from a little different perspective. It’s a good idea to stand back and visualize your work from time to time so that the proportions are correct. You may even have to push it outside and call in a couple of friends to get their opinions. Listen to their ideas and then do what you want! 😉 Here is the completed frame perched on the tall saw horses Bob built. It’s amazing how many brackets, braces, holes, etc. are in a frame to make it all come together. This is one of usually three primings that it takes before the frame is ready to final coat. If available, Bob likes to do each prime coat a different color so that the high and low spots show better and also it allows you to not over sand and put dips and doodles in the surface. Cheap flat black in spray cans works equally well! The frame and suspension are painted and assembled. There is no chrome on this car other than some nuts and bolts. The radius rods, panhard bar, drag link , and tie rods are all painted silver along with the spindles. Bob did not build a “ K “ member with this frame and it works OK. The problem is that if you put in a high performance engine or stand on it all the time, then the frame will twist and can do strange things. All the cars Bob builds today, are actually quite strong and they do utilize a “ K “ member type system as shown in the StreetRod 101 Frame and Chassis Construction DVD. He also uses a much stronger and somewhat different type of transmission crossmember. This coupe used a Mustang steering box mounted on its side, 70’s style. This will give you an idea of the rear suspension. It uses quarter elliptic springs and mounts on top of the axle with brackets and no shackles. This gives you one top parallel bar and when you put one bar below the axle and mount it to the frame, you have a rear parallel bar, spring suspension. The panhard bar keeps everything in place and it rides real well and is inexpensive to build. By the way, the bulk of this car was built in a 1 ½ car garage. The shop shown in the earlier photos was used primarily for the priming and painting. Most everything is mounted now for the last time: engine and transmission, exhaust, and everything else needed.  The body is almost ready to mount and then the fun really begins, wiring, dash, gauges, etc. The finished 1927 Ford Model T coupe hot rod. According to Bob, this car has been driven at speeds up to and including 120 miles per hour, although that’s not recommended by him. He does not have a death wish and was not the one driving nor was he a passenger in this buggy at that speed! The car handles and performs as good as it looks. Not bad for what started as two junker, rust bucket salvaged 1927 Ford Model T coupe bodies. This picture may look familiar to you if you’re a long time follower here. Bob sold the 1927 Ford Model T coupe and went on to build the yellow T-Bucket touring car by stretching a standard, cheap T-Bucket fiberglass body. We covered the construction of Bob’s stretched T Bucket body in another post. The fellow he sold the coupe to came through town on his way to Goodguys and stopped by to see Bob. He thought it would be a great opportunity to take a shot of two rods that he built in a 1 ½ car garage. When you follow the instructions and plan of someone who’s done it before successfully, building a Model T coupe or roadster hot rod becomes an achievement you can accomplish with a minimum of frustration and wasted time and expense.