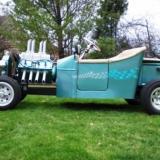 It’s described as a “custom 1923 T-Bucket electric golf cart”, but it doesn’t have anyplace to put your clubs. But it does have a kind of cool looking faux flathead mill. Built on a lengthened Club Car chassis and powered by an electric motor capable of speeds up to 30 MPH, I can only guess this T-Bucket concoction was intended either for scooting around the retirement community like a rebel or ensuring a place in all the local parades. Of course, I’ve mentioned the universal appeal of T-Buckets before and fans use them to create every form of conveyance imaginable. I ran across this little fabricated body T-Bucket on eBay where it’s listed with a $9000 starting bid (but that does include a trailer). Not too surprising that the last time I checked there were no bids. I must say, though, that it has a really beautiful interior and all the comforts of home. Who knows, it may yet end up terrorizing the streets of Del Boca Vista.

2 thoughts on “A T-Bucket Golf Cart?”