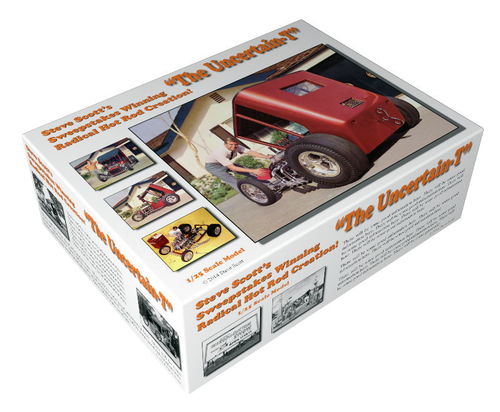 I’m a huge fan of Steve Scott‘s incredible ‘Uncertain-T’, have written about it, and consider Steve a friend. That’s why I was excited to learn about Steve’s ambitious project to produce an all-new version of the Uncertain T model kit, utilizing state-of-the-art technology to achieve the level of perfection Steve always demands.

As you may know, an out of production Uncertain T model kit can sell for hundreds of dollars. I’ve already pre-ordered 4 of the new and improved Uncertain T model kit using the creative process Steve has set up to reward early supporters. I’ll build one, keep one, sell one and give one to my grandson.

If you miss out on this once-in-a-lifetime opportunity you’ll kick yourself for sure. I don’t make a penny from this. I’m just excited to help Steve spread the word. You can read all about it and pre-order your Uncertain-T model kits at www.uncertaintmodelkits.com/