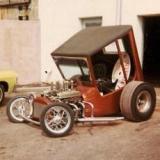 As the story goes, in 1961 a school buddy of Steve Scott drew a wild looking hot rod in a cartoon and when everyone agreed it would make an awesome car but would be impossible to build, Steve took up the challenge. Four years later in its November, 1965 issue, Car Craft magazine unveiled the “Uncertain T” with unprecedented fanfare. How about a cutaway on the cover, a 3-page feature story, a mini-feature on how to scratch build a model of the car, and the introduction of a young Steve Scott as Associate Editor. Much has been written about the Uncertain T, so I won’t go into detail about the scratch built exaggerated T body, the injected Buick nailhead engine and tons of innovative suspension and driveline work, including rack and pinion steering. The alert, faithful Car Craft readers, however, would have seen a small preview pic of the Uncertain T in the May ’65 issue in which it had the enviable chore of scooting down the Bakersfield quarter mile after the Top Fuel eliminator showdown to fetch “Big Daddy” Don Garlits and return him promptly to the starting line for the trophy presentation. Coincidentally, this was all happening about the same time that the hot rod world saw the introduction of Dan Woods’ cartoonish “Milk Truck”. Thus, a whole new era of show cars was born. It should also be noted that not only was Steve an accomplished car builder, but also an excellent photographer and a promoter of the first order; all of which helped ensure the Uncertain T’s huge success. Built at a reported cost of $15,000, which was exhorbitant for the times, on the car show circuit Steve was able to pull down from $400 to $1000 per appearance, all while Steve was still a college student. At the time of its Car Craft appearance, the Uncertain T had been a sweepstakes winner at the ’65 NHRA Winternationals, the ’65 Oakland Roadster Show, the Seattle Custom Auto Show and many others, having not failed to win in any show it had entered since early in 1965. Alas, in the July, 1967 issue of Hot Rod magazine the Uncertain T was for sale at the bargain price (compared to the claimed build cost) of $7000. Oh, to have had that kind of money back then. Let us know if your own T-Bucket interests or activities have been influenced in some way by Steve Scott’s Uncertain T, by posting a comment below.

15 thoughts on “A different Kind of Bucket: Steve Scott’s Uncertain-T”